See our offer of tours of Aarhus 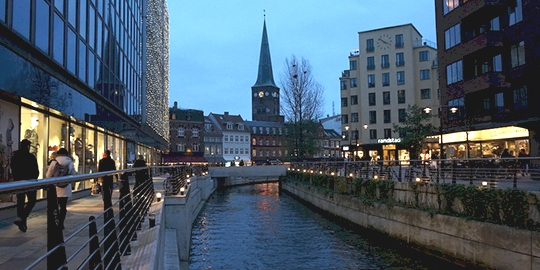 “The smallest big city in the world” is what is said about this captivating city. Aarhus does not envy any metropolis as it is the second most important city in Denmark, with the benefit being neither overwhelming nor noisy. It is cosy and has backwaters, beautiful landscapes and a lot of culture.

Even though Aarhus was founded by the Vikings and thereby is quite old, it has in average the youngest inhabitants, and is the most expanding city in the country. It is situated on the peninsula of Jutland.

The Art Museum ARoS is the most well-known building in the city and one of the biggest art centres in Northern Europe. It has a magnificent collection of Danish and Nordic art works of the 19th century. Furthermore, it has the famous installation Rainbow Panorama from where you can see all of beautiful Aarhus.

Other places you can visit in Aarhus include Moesgaard Museum, a museum of prehistoric events from the Stone Age to the Viking Age. The museum is wedge-shaped, it is partially buried in the earth and has a roof top fully covered by vegetation where it is possible to walk and which is used for sledding fun during wintertime. The library of the city, the largest in Scandinavia, is situated right by the river mouth. The Latin Quarter and the Vadestrædet zone both have a great atmosphere, bars and cafés by the river. Den Gamle By, or the Old City, is practically an open-air museum, has 75 buildings from the 16th and 19th century that teaches us about how houses, businesses, workshops and life in general used to look and be like in those periods of time.

St. Clement’s Cathedral is the cathedral of the city and is therefore also known as Aarhus Cathedral. You should not miss the pedestrian street, Badstuegade, either. It is one of the busiest places and the street is filled with art galleries, design boutiques, vintage clothing stores, craft stores and bicycle shops (in Denmark, the majority of the population bikes as their main means of transport). It is the perfect zone to feel hygge and there is lively nightlife as well.

Aarhus University is the biggest university in Scandinavia, Aarhus has the industrial port which is the most relevant of the country and major companies have their headquarters here as it is one of the worldly powers of technology and science.

The gastronomy is also worth it! You will not only find excellent Nordic food restaurants but also typical food with a twist of French influence that has been having a great impact on both the Danish monarchy and the upper middle class of the country.

With beautiful forest areas towards the North and South, a historic and musical tradition from jazz to rock and the theme park Tivoli Friheden, Aarhus is a city for all ages.

See our offer of tours of Aarhus