See of offer of tours of Odense 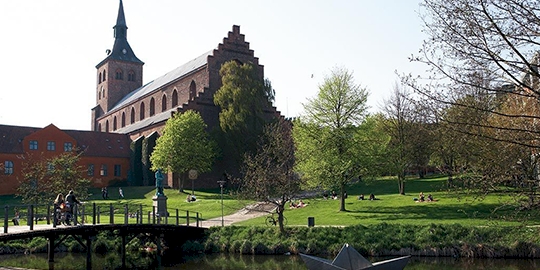 Odense is a city that you will instantly like. It is the home town of Hans Christian Andersen, author of fairy-tales, and home town of other nationally and internationally famous Danes. It is not only interesting, entertaining and fun to be in Odense but travelling there is also interesting. We can go from Copenhagen and see a fantastic engineering work: the bridge of Storebælt, which extends over the sea joining the islands of Zealand where the capital lies and Funen where this beautiful city is situated.

The city is more than 1,000 years old and its name comes from Norse mythology in honour of Odin, the mightiest god of the Vikings. This is the reason why Odense means “sanctuary of Odin”. Today, however, it is much more than a sanctuary as it also represents progressiveness and evolution. In Odense, you can admire not only houses dating back a couple of hundred years but also avant-garde architecture. This is also where some big Danish industries are situated, it has some of the biggest shipyards in the country and extensive flower and vegetable plantations (ecology is very important in this city).

In the Middle Ages, Saint Canute’s Church was a pilgrimage point. It is close to the pedestrian street that houses shops with various types of items. The Museum of Hans Christian Andersen and Andersen’s birthplace are also nearby the church. Did you know that the tales of this author have been translated to more than 120 languages, many have been cinematised and served as the setting for modern films? Another interesting fact is that some of his works are autobiographies and his tales are studied by psychology and sociology students. It is worth mentioning that the life of the famous author, just as his tales, are fascinating both in the eyes of locals and guests of the city. We offer telling you the details of his story, meaning that you will know everything there is to know about Odense.

Some final details: every year this city organises the Magic Days Festival inspired by Harry Potter, Odense has a zoo as well and an open-air museum called Den Fynske Landsby, The Funen Village. This museum has buildings dating back to the 16th and 17th century that have been reconstructed. In terms of gastronomy, there are recognised restaurants in the city and if you are looking for the recipe for hygge, you will find some answers in this cosy city.

See of offer of tours of Odense